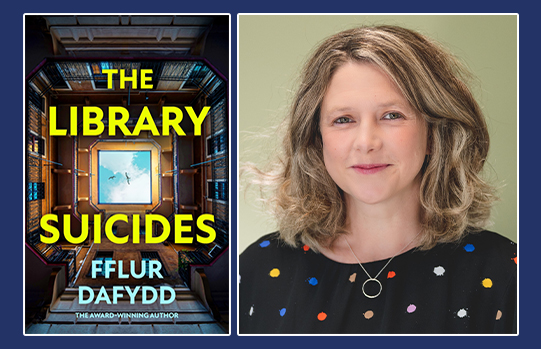 Fflur Dafydd is an award-winning novelist, screenwriter and musician, who writes in Welsh and English. She has published six novels, one short story collection and has created around 50 hours of prime-time drama for S4C and the BBC iPlayer. She also wrote and co-produced the feature film 'Y Llyfrgell/The Library Suicides,' (BBC Films) based on her own novel, which won numerous awards at the BAFTA Cymru awards and the Edinburgh International Film Festival. She has twice been nominated for a BAFTA Cymru for best screenwriter; and her fiction prizes include the Prose Medal (2006), the Daniel Owen Memorial Prize (2009), the Oxfam Hay Festival Emerging Writer Award (2009), and the Welsh Big Read Award (2010). She also won the Female Artist of the Year Award in the BBC Radio Cymru awards in 2010. She is a graduate of UEA’s creative writing MA, has a PhD from Bangor University on the poetry of R.S. Thomas, and was also selected as the first ever Welsh participant for Iowa University’s world-renowned International Writing Program. From 2006-2016 she was a creative writing lecturer at Swansea University.

Twins Ana and Nan are lost after the death of their mother, a renowned author who seemingly killed herself by jumping out of a window. Everyone knows who drove Elena to suicide – her long-time literary critic, Eben. But the twins need proof if they’re going to get their revenge.

When Eben requests access to Elena’s diaries at the National Library where the twins work, desperate to clear his name, they see an opportunity. With careful planning and just a little outside help, the twins lock down the labyrinthine building, trapping their colleagues, the public and most importantly Eben inside. But as a rogue security guard starts upsetting the plan and freeing hostages, Ana, Nan and Eben find themselves pushed to the limit. And what began as a single-minded act of revenge blooms into a complex unravelling of loyalties, motives and what it is that makes us who we are.

Hauntingly written, with a fresh, captivating voice, 'The Library Suicides' is an intensely memorable and provocative literary listen for fans of high concept thrillers that break the mould, and books about books and the concept of the written word.