Home Today This week
The Annual Richard Burton Lecture 2022: 'Reflections of a daughter: Kate and Richard Burton'
Add to Calendar 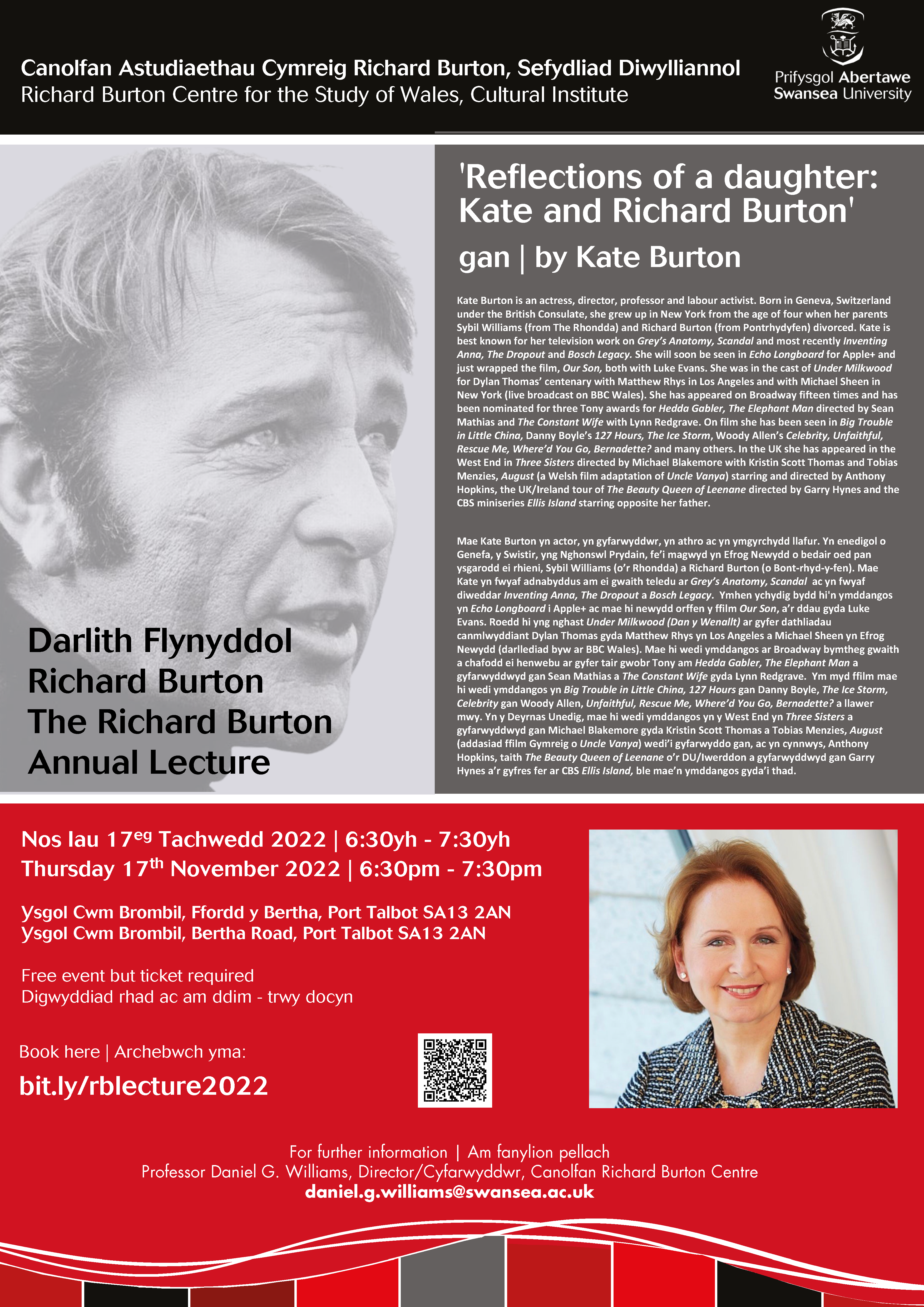 Organised by the Richard Burton Centre for the Study of Wales, Cultural Institute, Swansea University.

Kate Burton is an actress, director, professor and labour activist. She is best known for her television work on Grey’s Anatomy, Scandal and most recently Inventing Anna, The Dropout and Bosch Legacy. She will soon be seen in Echo Longboard for Apple+ and just wrapped the film, Our Son, both with Luke Evans. She was in the cast of Under Milkwood for Dylan Thomas’ centenary with Matthew Rhys in Los Angeles and with Michael Sheen in New York (live broadcast on BBC Wales). She has appeared on Broadway fifteen times and has been nominated for three Tony awards for Hedda Gabler, The Elephant Man directed by Sean Mathias and The Constant Wife with Lynn Redgrave. On film she has been seen in Big Trouble in Little China, Danny Boyle’s 127 Hours, The Ice Storm, Woody Allen’s Celebrity, Unfaithful, Rescue Me, Where’d You Go, Bernadette? and many others. In the UK she has appeared in the West End in Three Sisters directed by Michael Blakemore with Kristin Scott Thomas and Tobias Menzies, August (a Welsh film adaptation of Uncle Vanya) starring and directed by Anthony Hopkins, the UK/Ireland tour of The Beauty Queen of Leenane directed by Garry Hynes and the CBS miniseries Ellis Island starring opposite her father.

Born in Geneva, Switzerland under the British Consulate, she grew up in New York from the age of four when her parents Sybil Williams (from The Rhondda) and Richard Burton (from Pontrhydyfen) divorced. Receiving her BA from Brown University and MFA in Acting from Yale School of Drama, she is a Professor of Theatre Practice at University of Southern California. Honouring her Welsh Labour roots, she serves on the council of a labour union, Actor’s Equity Association, and was on the steering committee to unite SAG and AFTRA. She is on the boards of Broadway Cares/Equity Fights Aids and is an ambassador for The Elizabeth Taylor Aids Foundation. She lives in NY and LA with her husband, Michael Ritchie, and has two children, Charlotte and Morgan.