Home Today This week
'Land of Change: Stories of Struggle and Solidarity from Wales'
Add to Calendar 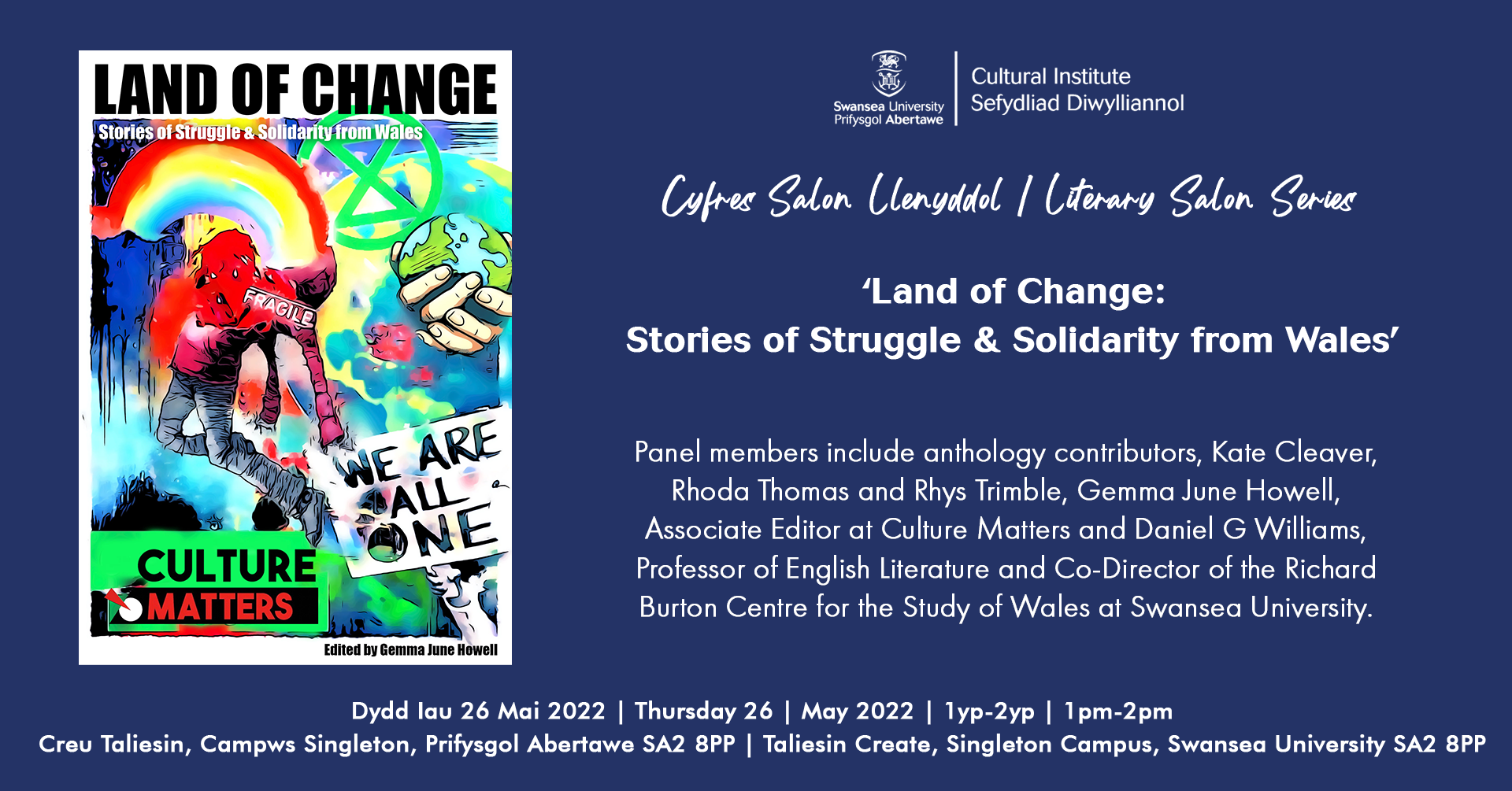 Kate Cleaver is an Anglo-Indian writer studying for a PhD with Swansea University. She is researching the lives of ordinary people who found themselves incarcerated in the Briton Ferry Insane Asylum, Vernon House. She is creating stories and has found that linking her stories to historical fact is a way to bring people from the past to life. In 2019 she was longlisted for the New Welsh Writers’ Award and has had a memoir published by Parthian in Just So You Know, and another in Painting the Beauty Queens Orange: Women’s Lives in the 1970s (Honno Welsh Women’s Press, 2021).

Rhys Trimble is a neurodiverse, bilingual poet, teacher, translator, performer, critic, musician, sound artist, visual artist, shaman, pastynwr, performance artist, publisher, editor and activist who provided a speech at the Banthebill protest in Bangor. Born in Zambia, raised in South Wales and resident in North Wales, he is the author of 20 or so books.

Rhoda Thomas: Originally from London, Rhoda has been settled in Wales for 40 years, contributing to the training of social workers, counsellors and doctors as a psychologist and sociologist. She has held office in student and trade unions, and with Tim Evans, she convenes the annual Llanelli 1911 Railway Strike Commemoration Festival. She is a founding member of the Live Poets Society, which brings together poets from across south Wales for workshops and open-mic events. A member of the Socialist Workers Party, she gives talks and writes on subjects such as the lives of female revolutionaries and the damage to our health from the food industry. She reads regularly at poetry groups and events. She is the author of Survive and grow in difficult times, and her poetry can be found in recent anthologies, in Red Poets, and in her poetry collections. In this prose- piece she writes about the challenges she has faced in life as a working-class woman, and the value of solidarity.

Gemma June Howell (Editor) is a grass-roots activist, writer, poet, tutor, academic, Associate Editor for Culture Matters and regular contributor to Nation Cymru. Co-founder of the CSOS, she co-organised the Sister March (Cardiff, 2017). Previously published in ‘Onward/Ymlaen!’ and with the Red Poets, she performs annually at the Merthyr Rising Festival. Her work has appeared in Bloodaxe Books (2015), The London Magazine (2020) and ‘Tongue & Talk,’ (Made in Manchester, for BBC Radio 4, 2021). Gemma has recently submitted her PhD: an emancipatory project exploring collective trauma, and transcendence. Entitled Concrete Diamonds, it’s a hybrid novel, featuring an interwoven, eco-feminist mythopoeic tale, punctuated with graffiti, punk-style concrete poetry. Essentially a polyphonic homage to working-class people living in post-industrial Britain, the work captures the life worlds of five generations and encompasses a range of literary styles: from steam-of-consciousness to polemic, melodic and poetic, gritty realist and dark comedic. Underpinned with critical theory, the novel illuminates the past origins and present conditions of poverty, discrimination, and subjugation of underrepresented and marginalised people.

Daniel G. Williams is Professor of English Literature and Co-Director of the Richard Burton Centre for the Study of Wales at Swansea University. He is also Co-director with Kirsti Bohata of CREW – the Centre for Research into the English Literature and Langauge of Wales. He has edited several books and is the author of Ethnicity and Cultural Authority: From Arnold to Du Bois (2006), Black Skin, Blue Books: African Americans and Wales (2012) and Wales Unchained: Literature, Politics and Identity in the American Century (2015). 2021 saw the publication of a new edition of his collection of Raymond Williams’s writings, Who Speaks for Wales? Nation, Culture, Identity. It first appeared in 2003 and the new expanded edition marked the Centenary of Raymond Williams’s birth.

As part of the Literary Salon series, the Cultural Institute and Culture Matters invites you to the launch of Land of Change: Stories of Struggle and Solidarity from Wales. Edited by Gemma June Howell, Land of Change is a colourful anthology of bold artworks and documentary photography as well as insightful, enlightening and poignant creative pieces, speeches, journalism and memoir. It is a celebration of the diverse collectanea of underrepresented and working-class voices from Wales.