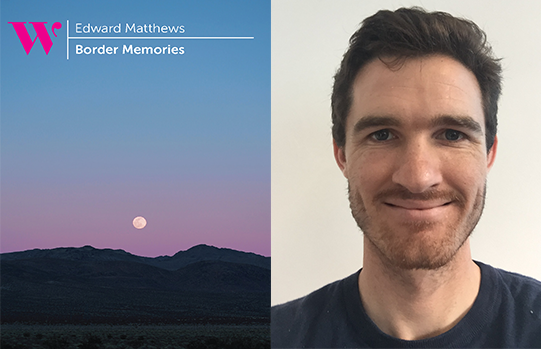 Edward Matthews is a writer based in San Diego, California. He earned his PhD in Creative Writing from Swansea University in 2020. He has read and published widely on the topic of reimagining space along the US/Mexico borderlands. Border Memories is his first novel.

As part of the Literary Salon Series, Edward Matthews will be in conversation with Alan Bilton, author and Senior Lecturer of English Literature and Creative Writing at Swansea University.

Why live one life, when you could live a thousand? Sol Andrews works for a San Diego start-up that traffics in the underground memory trade—harvesting memories from donors in Mexico and implanting them in Americans. He inherited the job from his brother, whose recent suicide left a hole in his life.

Sol’s newest client is Mr Bray—old, rich, well-connected, blind. Mr Bray has heard rumors of a mysterious graveyard in Tijuana where miracles are said to occur, a place that could restore his sight. He has tracked down a young librarian who knows the graveyard—Nora Rincón—but its location is buried in a childhood memory.

Sol’s task is simple—find Nora, build rapport, extract her memory. His reward: $100,000. However, when Sol befriends Nora, he finds that she is everything he’s not—funny, optimistic, attractive—and he is drawn to her. She helps him process his grief and open him back up to life. But as they grow closer, Sol begins to understand who Mr Bray is and what he is capable of—and knows it’s too late to go back on their agreement…